Poll: What Would You Call Bill Clinton If His Wife Were Elected President? 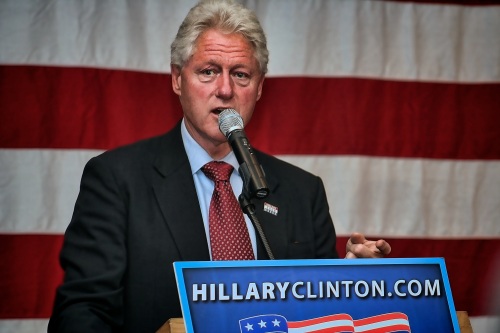 There has been a great deal of discussion about what term to use for President Bill Clinton should his wife, Hillary become president. In a recent request sent to Help A Reporter Out (HARO), the question was put forth.

Please give your opinion. There is an article scheduled to be written based on the responses provided. You will remain anonymous if you choose.

So, far there have been some interesting comments.

Gavin Long – “Bill’s title, like all former presidents, will always be “President Clinton.” This creates a very unique scenario. I think he would most likely be referred to as “Former President Clinton,” although “First Grandpa” seems fitting for Bill.”

Gary Frisch – I am a 27-year PR and communications professional, and a former journalist. I happen to be a registered Democrat and plan to vote for Hillary Clinton, but I usually don’t vote the party line.

As a former president, the title “Mr. President” still applies in civilian life, that won’t change, and it is the highest title one can hold in this country. So as the first husband, I believe he should still be referred to as Mr. President. Referred to in the 3rd person – when he’s not in the room, for example – I think “First Gentleman” is appropriate. When they are together, and being addressed, Hillary will be “Madam President” and Bill would be Mr. President. There’s hardly any room for confusion.

The press should refer to him in print as the First Gentleman, or “First Gentleman Bill Clinton” upon first reference, or simply “former President Bill Clinton.” I’m sure the editors of the AP Style Guide are wracking their brains over this as we speak.

The best response was given by Mike Purdy, who is a Presidential Historian from Seattle, Washington:

If Hillary Clinton’s husband was not a former president, he would probably be called First Gentleman. But we have a very unique situation here in that Bill Clinton, like all former presidents, is still referred to as “President,” in this case “President Clinton.” It would be a demotion and sign of disrespect for the office of the presidency that he once held to refer to him as simply First Gentleman or any other term than President Clinton.

When referred to together, the right way to describe them would be “the President of the United States, Hillary Clinton” and “President Bill Clinton.” In fact, in some settings, the former president may simply end up being referred to as “Bill Clinton” in order to not confuse the situation implying that we have two presidents Clinton.

I’m sure that the wise minds in the etiquette world will ponder this dilemma and come up with appropriate protocols.

I am looking forward to your replies. The topic is great!!

1 Response to Poll: What Would You Call Bill Clinton If His Wife Were Elected President?